Our friend, Claudia Pastorius and her 9 year old daughter Hannah dropped by Salir do Porto for a few days on their way to Spain.  During lots of grilled fish and other Portuguese fun she said she had all access tickets for Metallica asked us to go.

Hannah’s bass player dad is friends with the bass player Robert Trujillo, Hell, yes, even a blues fan like me knows a musical legend when she sees one.  Earplugs in my pocket, Hannah had her doll she wanted to have signed by the band, we hopped the bus to Lisboa ready for the headliners at the Rock in Rio.

Doll in hand we made it to the box office and received our backstage passes and tickets.  After four security lines, all of them friendly (they let the box of a dozen Pastel de Nata through). We brought a box of those national treats as a thank you to the band.  Entering the grounds of Rock in Rio we found ourselves in a Disney of rock and roll parks, it had a trippy Ferris wheel and a zip line you could ride over the crowd at the main stage.  Even before getting backstage, it was the best rock venue I had been to, lots of windy paths and park like settings to sit and chill, really pretty.

With our magic passes we made our way behind the big stage into the land of the semi trailer trucks.  We were led to the VIP tent then it was four star experiences all the way.  Decorated beautifully, a nice bar and food, people chatting.  We cosy’d onto a white leather couch and waited for Robert while we had a beer. 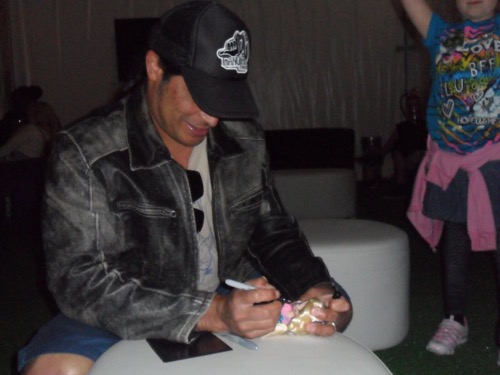 Robert Trujllo, I don’t know if this is supposed to get out, is a really nice guy.  He loved the surf here in Portugal and wished he could spend more time, loved the Pastel de Natas and was keen on signing Hannah’s doll.  Spent some time talking about David Pastorius, Claudia’s ex, while I was chatting with his assistant Brie.  She was fascinated that we moved from the U.S. and started over in Portugal with just our suitcases.  I decided she had the dream job, until I thought about having to keep track of four heavy metal musicians and all that goes with it that is just scary!

Brie rounded up James Hetfield to sign Hannah’s doll and reported that most of the Pastels were gone.  We watched the band’s “meet and greet”, which was fun, line em up and smile.  Then Brie took us off to a safe VIP-ish place to watch the show, it was really more of a spectacle.  The mainstage grounds were packed and we were pinching ourselves getting to see it from a box above the madness, endless supplies of beer and sandwiches, and a good view of the zip line riders, oh, did I mention the comfy couches. 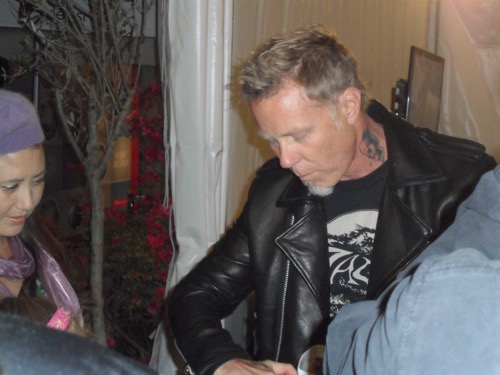 They rocked so hard the ground shook.  Never was I happier to have ear plugs, I could hear the music, but not have that pesky blood coming out of my ears. When Claudia asked us in Salir do Porto to go see Metallica, my first instinct was to say no.  Metallica fans are all young men in black leather that scare me.  OK, I was scared; this was out of my comfort zone.  But, it was an adventure so what kind of adventure abroad writer would I be if I said no.  I had the time of my life.  Lesson to self, never say no to an adventure, especially the scary ones. And to Metallica, not only are you legends, you are a nice bunch of rockers, thanks for everything. 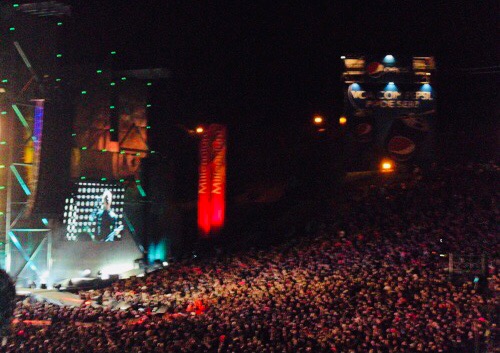