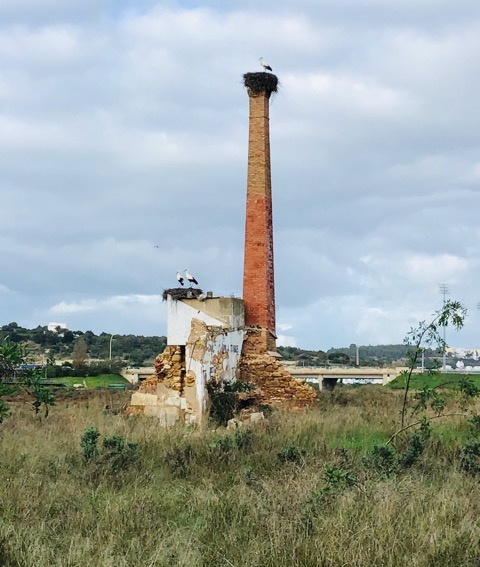 All around me, big white storks lounge around on their king size nests, bird versions of those tourists you hear about, the ones that come to a nice warm beachy destination on holiday and like it so much they forget to go home.

These Iberian White Storks should spend their summers at home in their European nest and then migrate to Africa for the winter via Gibraltar. While not very good fliers, they are great at gliding the thermal air currents.  But even gliding is still an arduous journey only to be repeated in the spring when they have to glide back home.

It seems sometime in the 1980’s, around a thousand storks landed in Portugal, found landfills filled with all sorts of yummy things just sitting there… like a hotel’s breakfast buffet…and decided they weren’t going anywhere.  Apparently our Iberian White Storks are either really smart or just plain lazy. Today it’s estimated over 10,000 call Portugal* home, and with more recycling and shrinking landfills (a good thing) they have taken to fishing along the banks of rivers and in flooded fields.  Eating frogs, bugs, even an occasional small mammal they found they simply adore the Lagostim, those small lobster-like creatures found in the swampy riverbeds, a Portuguese specialty.  Lagostim are really good ole Louisiana crawfish.   I think an enterprising sailor from merchant ship trading days brought a few barrels of these back to Portugal, along with the cotton from New Orleans.  Some of those crawfish changed their names and escaped into the Algarve.  The storks and I thank that sailor each time I pull out my Cajun seasoning mix and boil up the local mudbugs, they are the same mudbugs I eat on the Louisiana Bayou.

Ten pairs of storks own homes in my new neighborhood. I say own because they stay in their nests for decades.  They live 20 to 30 years!  Never having been around storks before, I am totally enthralled with so many living right next door.  Even when it’s cold and raining, you’ll find me still sitting on my balcony surrounded by computer and binoculars, swathed in sweaters watching “my” storks and Googling anything I can find out about them, like the landfill thing.

People think storks mate for life, no, not true.  Storks really hook up because they want the nest.  An older male stork wants a great nest, and he will ”court” whichever Lady Stork has that great nest, and then he will keep that nest after she glides off for greener riverbeds. Weighing about 20 kilos (44 pounds) and measuring about two meters (six and a half feet) round, these huge stork villas have lots of wing room.   I’ve  been watching them redecorate. Poking big sticks into the sides, they consult each other about placement. Sometimes one pulls a twig out then throws it off the chimney; obviously it didn’t fit with this year’s nest theme. Nests are multi-residential; starlings, swallows and even the occasional owl are welcome to make their own little home in the lower jumble of sticks and twigs.

When they are feeling frisky, I hear lots of clattering and see head bobbing.  This means the eggs will show up in a month, then the babies a month later.  From what I can see from my balcony, there will be little stork-lings come April.  Mr. Stork will be the Baby Daddy for all the little ones; Iberian White Storks don’t fool around like some of those other storks. All the babies are treated the same, from the meekest to the meanest, they all get the same amount of food and the same chance to grow up and probably stay in the Algarve.

Storks have enthralled every civilization lucky enough to have them.  In ancient Egypt, the word for stork was also the word meaning soul.  In Hebrew, it is casidash, merciful or kind.  The Greeks and Romans thought storks represented parental devotion and storks didn’t die, they flew (glided?) off to an island and there became human.  A Greek law called Pelargonia, after their word for stork, required citizens to care for their aging parents.  Killing a stork demanded a death sentence!  As storks glide to Mecca, they are revered in Islam.  Aesop wrote three stork fables, and of course we all know Storks bring the babies, right?

Here in Portugal if a person has bad luck, the old saying was “he must have killed a stork”.  If you were caught killing one, your hand was cut off, and that’s pretty bad luck right there.  Living here, surrounded by storks I am lucky if I can accomplish anything anymore.  When the sun rises and silhouettes the towers of the old sardine factory, I stare at my winged neighbors, vision magnified with binoculars. I have become a stork stalker of the worst kind.

If I ever become so jaded by life that my heart does not leap out of my chest when these magnificent birds swoop by me as I quietly watch in awe, it is time to send me back to where cubicle walls defined me.  The breathtaking beauty of being surrounded by storks, or whatever your “stork” is,   your passion, is a wonder to cherish and delight in each and every day.

*source: Nathalie Gilbert, a student at the University of East Anglia, Norwich (UK).