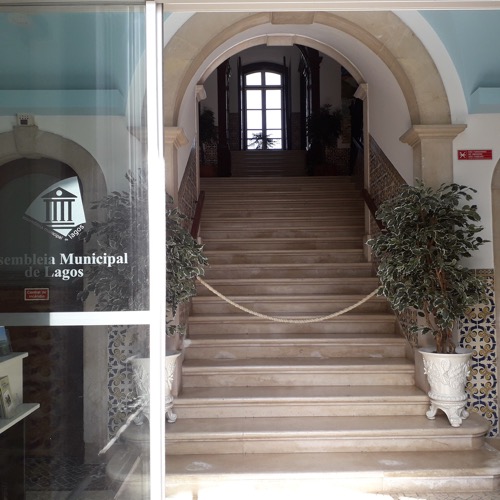 Earlier this year on 21st of May accessiblealgarve blog co-founder Constance filed a claim with the Provedora de Justiça (Ombudsmen) in Portugal.

The claim outlines and documents the lack of accessibility for people with reduced mobility to public transportation and public meetings in the Algarve. The filing was a result of months of work to document and craft the claim and we are very happy to have had the pro-bono assistance of a Portuguese law firm.

One aspect of the claim deals with access to the Lagos municipal assembly (City council) meetings. Under Portuguese Law all government meetings and buildings are required to provide access to people with disabilities, these rights are enshrined in Articles 48 and 71 of the Portuguese constitution. In addition Portuguese law numbers 38/2004 and 163/2006 required buildings to be adapted by 2017.

We were very grateful when newly elected assemblywoman Margarida Mauricio of the People Animals and Nature Party (PAN) kept a campaign promise and introduced a motion to the the Lagos municipal assembly on Dec 17th 2017.

The motion was to follow Portuguese law and require the old assembly building be adapted to accommodate people with disabilities or that an alternative location be found to hold the meetings. For example the Lagos county council (Câmara) has a modern building that is fully accessible and the assembly meetings could easily be held there.

Unfortunately the motion failed to pass and to date the building and the meetings remain inaccessible to people with reduced mobility.

We have been advised that our claim has been received and opened and some of the parties have been notified. We will have a lot more details regarding the claim in the near future, and are hopeful that the Provedora will issue a report and advisory opinion within a year.

In the meantime, you can check out out the website of the Provedora at https://www.provedor-jus.pt/